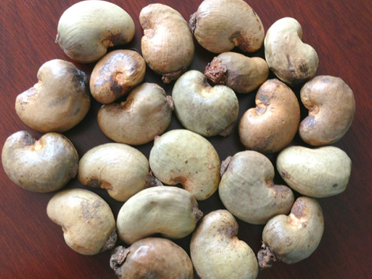 Raw Cashewnut (Anacardium Occidentale) is the only raw material for the Cashew Industry. The Cashew tree (Anacardium Occidentale) is a tropical evergreen native to the Americas but is now widely cultivated in Asia and Africa. Cashew in its natural form is a soft, white, meaty kernel contained within the hard shells of kidney shaped, raw cashew nuts.


The cashew tree has been cultivated for food and medicine for over 400 years. Cashews have served nutritional, medicinal, and wartime food. .

The cashew fruit is unusual in comparison with other tree nuts since the nut is outside the fruit. The cashew apple is an edible false fruit, attached to the externally born nut by a stem. In its raw state, the shell of the nut is leathery, not brittle. It contains the thick vesicant oil, CNSL, within a sponge-like interior. A thin testa skin surrounds the kernel and keeps it separated from the inside of the shell.

The primary products of cashew nuts are the kernels which have value as confectionery nuts. Cashew nut shell liquid (CNSL) is an important industrial raw material for resin manufacture and the shells can be burned to provide heat for the decorticating operation.

The cashew tree has been cultivated for food and medicine for over 400 years. Cashews have served nutritional, medicinal, and wartime food. More recently, they have been used in the manufacture of adhesive, resins and natural insecticides. During world war II, the cashew tree became highly prized as the source of valuable oil drawn for the shell.